Garden of the Gods

“You could face away from the barracks, look past a tiny rapids towards the darkening mountains, and for a while not be a prisoner at all. You could stand suspended in some odd, almost lovely land you could not escape from yet almost didn’t want to leave.”

The dream enters sleep as a vivid visit to my childhood home on Sierra Grande, two blocks of clustered homes inhabited by World War II vets and their families, wedged between the mainline of the Santa Fe Railroad and Foothill Blvd/Route 66, in East Pasadena, California.  Even now, as I write, I feel a visceral longing for that place of sweet memories, where neighbors were more like extended aunts and uncles. The Technicolor dreams are clear and real. I hate it when they end.

When I make my monthly visit to care for my aunt and uncle in Altadena, I drive west on the 210 Freeway toward downtown Pasadena, exit at Michellinda Avenue, the off ramp passing directly over the old neighborhood, now buried under twenty feet of fill and concrete.

However, there are other memories of home, buried in sand and debris, which can be restored again to tangible reality. This is the experience of a Japanese American family forced to live among 10,000 other displaced Americans in the desolate desert landscape of Manzanar during World War II.

Kuichiro Nishi was forced to leave his home in Los Angeles and his landscaping-nursery business and come to Manzanar with his family in 1942.  Life was stressful in the tightly compressed community, where his family lived in a dormitory, subject to blasting hot, dusty summers and stark, frigid winters. Kuichiro’s landscaping talent helped to transform the bleak camp landscape with a garden in Block 22.

Camp Director Ralph Merritt recognized Nishi’s native talent and provided concrete and other supplies to construct the remarkable Pleasure Garden (later to be named Merritt Garden in honor of this benefactor).  The garden was a breathtaking design of water ponds, wooden bridge, gazebo and plants. It became a place of serenity and a gateway to connect with the Holy for the people who had to live here. Ansel Adams made a famous photograph of the garden and you can see film clips from home movies of the garden, as it was, at the Manzanar National Historic Site Visitor Center.

With the end of World War II, residents of the camp returned to their homes and camp buildings were dismantled or sold off. The desert reclaimed the landscape with blowing sand and occasional flashfloods rushing out of the Sierra Nevada.  When I drove through the camp twenty-five years ago, desert debris had covered the gardens.

In the last decade, the Manzanar National Historic Site breathed new life into the ruins of the camp, resurrecting the stories and buildings of the camp so that what happened there would not be forgotten. Park archaeologists worked with volunteers to excavate the gardens in the camp. Among the volunteers was the Nishi family.

Henry, Edith and Barbara, three of Kuichiro Nishi’s children, joined other volunteers to carefully excavate brush and sand from the Merritt Garden and breathe life again into their father’s vision.  Having participated in many archaeological excavations myself, I can imagine the family members on their knees, brushes in hand, carefully removing the desert’s grip on their father’s handiwork.  As they labored with  other volunteers, touching the rocks and crawling around on the ground, memories sparked to life; they found voice again to share stories about their father and what is was like for the family to live in this camp 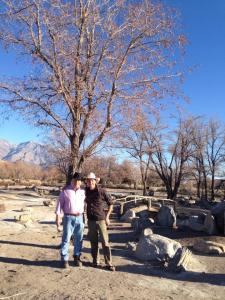 Last week I made another desert retreat to the Owens Valley and I discovered that JR and Maria Carillo Arnold were still living in Independence, a few miles north of Manzanar. I had blessed their marriage several years ago. They had worked at Manzanar as rangers and archaeologists.  They invited me to meet them at the Merritt Garden.

A severe drought year seems to be pressing hard on California. The Sierra Nevada had a minimal covering of snow and no rain in sight. But the pleasant fruit of the drought was a bright, sunny January day, 70 degrees. Those days always take my breath away.

I parked my car near the northwest corner of the camp and met JR and Maria and an incredible tour of the Merritt Park unfolded.  JR is a brilliant, inspired narrator and he had in his hand the “Bible for Japanese gardens” and perhaps the oldest book on gardens: Sakuteikei: Visions of the Japanese Garden, written one-thousand years ago. I could see from the tattered pages that JR had imbedded the knowledge from this book and that was clear as he led me on a tour of the garden.

I often need a guide to help me appreciate the nuances of art.  I see colors, images and textures, but I need someone who knows how to help me see what this all means. The creative genius of Kuichiro Nishi was grounded in his own understanding of Sakuteikei. JR’s rapid-fire tour opened my eyes to the spiritual potency of this garden park.

Most Japanese garden ponds were either Tsukiyama (hill gardens) or Hiraniwa (flat gardens). JR pointed to the lower waterfall pond in the shape of a tortoise, symbolic of longevity. I saw a medium size rock in the pond shaped like a tortoise.

During the 1600s through the 1800s (the Momoyama to Endo Period in Japan), Tsukiyama was the most common garden design. Three important features were a waterfall, a stream and a pond.  I saw a mound of dirt crowned with a cluster of boulders. Water flowed from this northern point, over the waterfall (fed by a natural stream), moving south through the pond. JR said this pond could have had local trout.

JR, Maria and I walked around the garden to two large entry stones (steles) with Japanese writing.  A recent pour of concrete outlined the recreated site of the Tea Pavilion. A delicate, stone bridge brought us to an island in the middle of the pond, which symbolized the abode of the Taoist Heavenly Immortals.

The inspiration for the Sakuteiki were the Chinese gardens of the Song Dynasty (960-1279).  JR pointed out how every boulder and rock in the garden was placed with great care and spiritual meaning. While Chinese gardens emphasized individual rocks resembling animals, Japanese gardens tended to emphasize the harmony of the whole layout.

JR’s leaf-eared garden bible, the Sakuteiki, gave specific direction for the arrangement of the rocks:

“Make sure that all the stones, right down to the front of the arrangement, are placed with their best sides showing. If a stone has an ugly-looking top, you should place it so as to give prominence to its side. Even if this means it has to lean at a considerable angle, no one will notice. There should always be more horizontal than vertical stones. If there are ‘running away’ stones there must be ‘chasing’ stone. If there are ‘leaning’ stones, there must be ‘supporting stones.’ “

I am walking through a spiritual sanctuary that sustained and nurtured the people who had to live in this camp during World War II. While the Japanese nature religion of Shinto was severely repressed in the camp, because of some aspects that honored the Japanese Emperor, the stones surrounding me in this garden have great spiritual power. The stones were a spiritual medium to induce the gods to bring blessings of health and good harvest. Through the influence of Buddhism, the precise placement of stones could be used for geophysical divination. At the center of Japanese gardening is the placement of these stones because they are powerful animate objects.  Sitting on a rock, meditating with the sound of running water, the rustle of twirling cottonwood leaves and the expansive view of the Sierra Nevada in the distance, residents of the camp could experience intuitive connection to the kami spirits.

We contemplated the garden in long silence. For a few moments, the dormant, leafless trees became lush and green, water gushed from the two waterfalls, and Japanese American families clustered around the edges of the pond, children dipping and wiggling their little toes in the cool, flowing water. Surely, God is in this place, this garden.

6 Responses to Garden of the Gods